President Wilson was in the middle of making a successful bid for reelection with the campaign slogan, “He kept us out of war.” He ultimately did not. Some blame it on German atrocities in Belgium, once thought apocryphal but now beginning to be accepted as historical fact.

In 1915, the passenger ship RMS Lusitania was sunk by a German U-Boat, with nearly 2,000 civilians dying, 128 of them Americans. The Germans claimed that the Lusitania was carrying ammunition. Decades later, released secret documents revealed that the British and American governments were lying — the Lusitania was in fact carrying war ammunition. In April of 1917, after Wilson said that Germans would not give up unrestricted submarine warfare and claiming that they were cajoling Mexico to take up arms against the United States, Congress declared war on Germany and the Central Powers.

In October of 1918, the Americans found themselves facing battle deep in the Germanic forest. The Battle of the Argonne Forest began on Sept. 28, 1918 and would not end until the Nov. 11 armistice. The forest battle precipitated the Great War’s end.

Which bring us to the subject of our native son, 34-year-old Major Charles White Whittlesey, a member of Pittsfield High School’s Class of 1901. Whittlesey’s family came from Wisconsin to Pittsfield so his father could work at General Electric in 1894, first as a purchasing agent, then as a production manager. Whittlesey went from PHS to Williams College, graduated in 1905, and was voted third brightest of his class. His family remained in Pittsfield were he frequently visited.

One hundred years ago, Whittlesey was a successful lawyer in New York, a graduate of Harvard Law. By August of 1916, he was graduating from military training in Plattsburgh, N.Y. On August 8, 1917, he was placed on active duty. That September, Whittlesey was commissioned a major.

In 1918, Major Whittlesey led 554 young souls, many poor immigrants, into the German forest against well-fortified German lines. Flanking support on their left and right, which the generals had promised, was not there. Soon they were completely enveloped by the Germans, and would be forever known as the “Lost Battalion.”

For five days they were surrounded. They ran out of food. Ammunition was scarce. They were even shelled by friendly fire, until they sent their last carrier pigeon (the rest were shot), with a message: “We are along the road parallel to 276.4. Our own artillery is dropping a barrage directly on us. For heaven’s sake, stop it.”

Losses were staggering. Of the 554 troops, 197 were killed in action and approximately 150 were missing or taken prisoner. The Germans sent a messenger asking for surrender, to which Whittlesey famously refused to accept. Whittlesey’s “Lost Battalion” doggedly held its position and made a mess of the German advance, bringing the war to an end.

The Lost Battalion instantly became the subject of newspapers across the world and Whittlesey was lionized. A silent film was made in 1919, “The Lost Battalion,” where Whittlesey played himself. It was remade into an inspirational made-for-television film in 2001, which can be watched on the Internet.

Whittlesey was one of only three Medal of Honor recipients during World War I. By war’s end, a national hero, he was honored by being pallbearer for the Tomb of the Unknown Soldier. 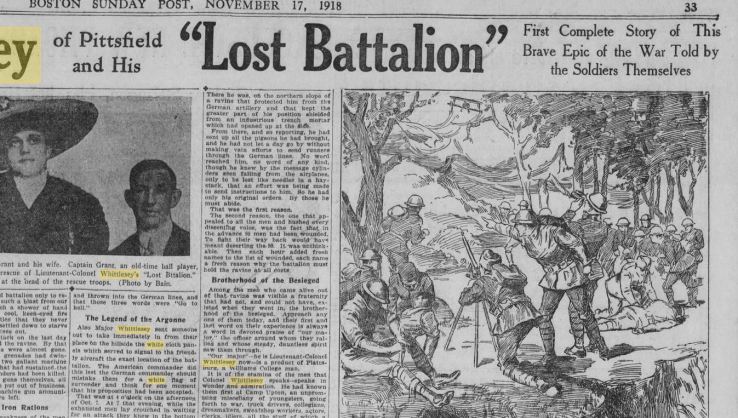 But the war got to Whittlesey. Some say it was the post-war struggle of many of the young men he led that got to him. Martin C. Langeveld, a former Berkshire Eagle executive and a local historian, describes Whittlesey’s death in 1921 on an ocean liner: “He stepped on deck, leaned precariously over the rail, shot himself in the head with an army-issue pistol, and fell into the dark sea.”

I write of this to plant a seed of an idea. It would be great if here in Berkshire County we did something to honor the centennial of the Lost Battalion and the heroics of our native son, which is a justifiable source of immense local pride. Maybe it could be a ceremony, part of Veterans Day, a museum display, or a series of newspaper articles. We still have time.

The writer is a local attorney whose columns have been printed across the nation.